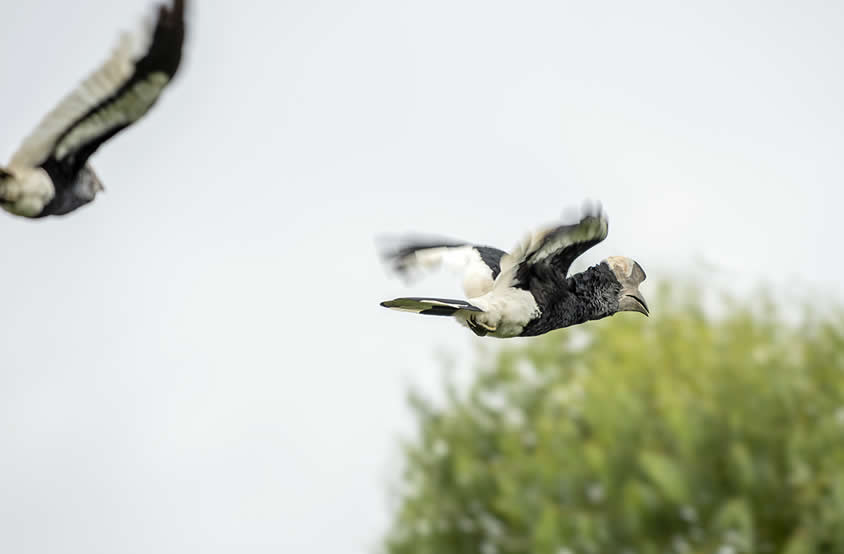 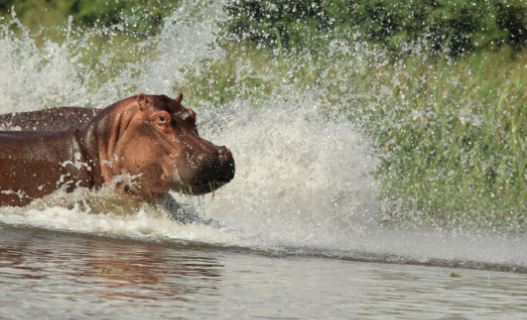 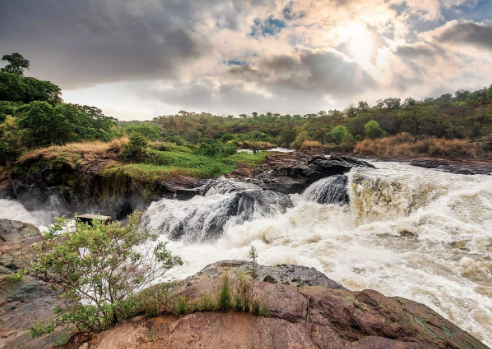 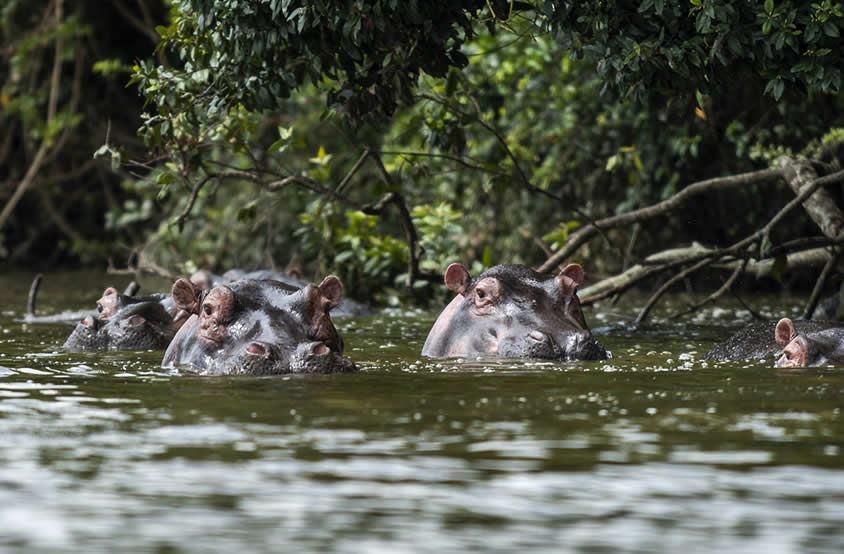 Murchison Falls National Park…In one word: Amazing!
Some of the most unforgettable scenes of the mighty River Nile are found here.

Covering an area of 3893 square kilometres, it’s the largest of all National Game Parks in Uganda. Famed for its rich fauna: hippos, bucks, buffaloes and the monster croc of the Nile.
The Murchison Falls National Park is situated in the northern part of Albertine Rift Valley.
It’s well-known as one of Uganda’s most ancient conservation areas. The Albert Nile corridor is on the low plains at an altitude of about 612 metres above sea level at the delta point. The temperatures tend to be hot during the months of December, mid-February, June as well as July. The rainy season is between April and November. 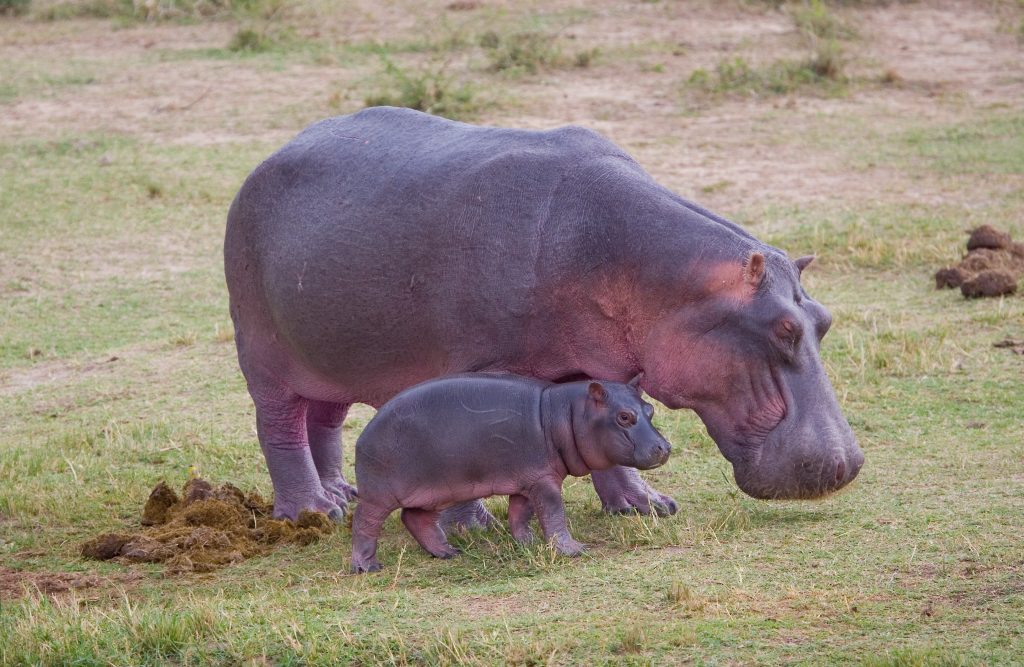 One of the highlights is a game drive across the Northern bank. The park is home to 76 species of mammals including four of The Big 5 with huge herds of buffaloes and elephants, well-camouflaged leopard and a healthy population of lions. However, the “specialty” of this area is the large amount of giraffes that you can’t miss. In Uganda these can only be viewed here and in Kidepo Valley. Other species viewed regularly along the game tracks include Jackson’s hartebeest, bushbucks, Ugandan kop, waterbucks and warthogs. Resident crocodiles and hippos as well as other, visiting wildlife are found along the river. At Murchison Falls the Nile is channeled through a dramatically narrow cleft in the rift valley escarpment.

The Falls
A visit to this park is incomplete without seeing the magnificent falls themselves. They can be viewed from the top by car, hiking or by a boat trip on the river Nile below the falls. The foam, which floats on the surface downstream for miles, shows how the water has been compressed and churned through the narrows. 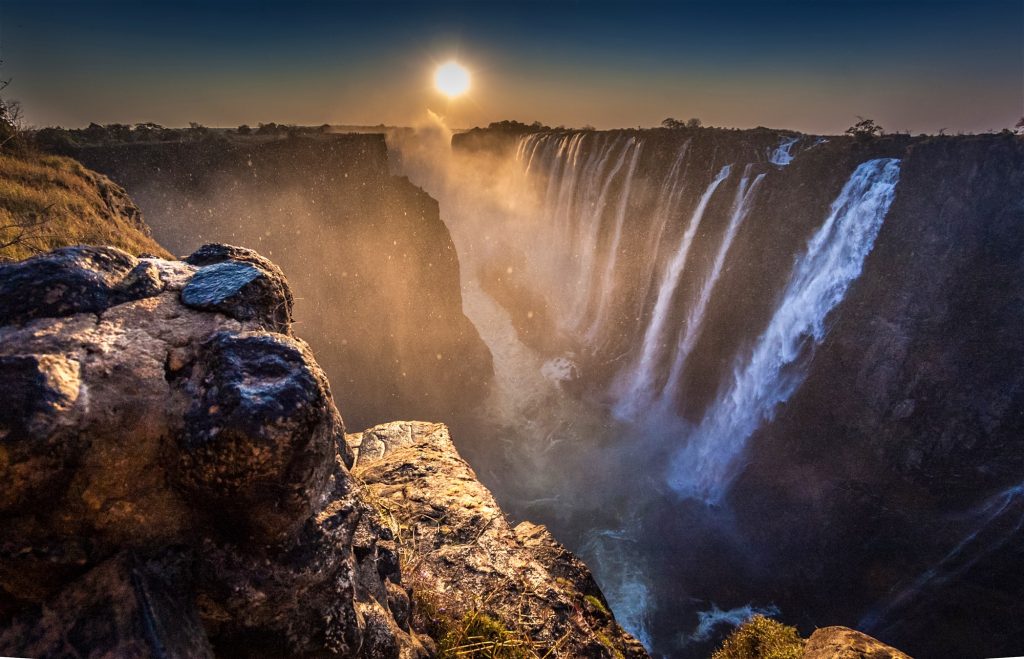 Primates
Olive baboons are common along the roadsides – be sure to keep car windows and doors shut if you don’t want to lose your lunch! Blue and red-tailed monkeys and the black and white colobus can be found in the forested sectors. The savannah-dwelling patas monkey is only found here and in Kidepo Valley National Park. Around 800 chimpanzees live in the Kaniyo Pabidi and Budongo Forests.

Birds
The varied habitats of Uganda’s largest park make it home to a wide variety of birds: over 450 species have been recorded here. The list includes the shoebill stork and the grey crowned cranes – Uganda’s national bird. Also seen along the banks of the Nile are the blue headed coucal, the swamp flycatcher, squacco heron, african jacana and many, many more. 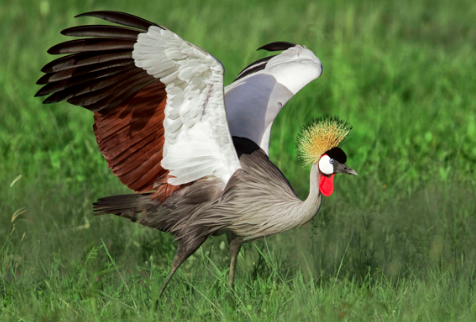